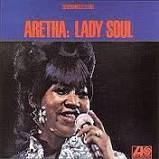 Last night I downloaded Aretha Franklin’s Lady Soul album from emusic. An excellent recording, given five stars by Allmusic.com , it was released in 1968 and was Aretha’s second album after her debut on Atlantic records. A favorite track of mine is Good to Me as I am to You which features Eric Clapton on guitar.

As I listened to the opener Chain of Fools I thought of how uncharacteristic this song was for the soul genre of the day. It basically hangs on one chord for the entire song (C dominant 7). Yes, I know that funk songs sometimes do this but this song is not played in a funk style, instead, it has more of a blues or country feel. All that I could compare it to would be the Grateful Dead’s cover of an old Appalachian tune called Cold Rain and Snow which stays in E natural for the entire song.

I decided to learn more about Chain of Fools so I Googled it. Wikipedia had this tidbit:” “Chain of Fools” is an unauthorized rewrite of the gospel song “Pains of Life”, released earlier in 1967 by Elijah Fair & the Sensational Gladys Davis Trio. “Pains of Life” has the same melody as the later song, as well the chorus “Pain, Pain, Pain”, which is echoed as “Chain, Chain, Chain” in the Franklin recording.” How interesting. To hear Pains of Life, click on the link. Even the “hoop, hoop” of the background singers at the song’s bridge is the same. Nevertheless, Chain of Fools is credited to Don Covay, a singer/ songwriter in contract at the time to Atlantic records. By the way, Covay’s father was a Baptist minister, so, he might have been familiar with the gospel music scene.

This explains the song structure. Gospel music, like the Appalachian tune, dates back to a time when it would not be unusual to write a song with just one chord. It seems that as you go further back in time there was more variation in musical forms. For example, musicians often had a hard time keeping up with John Lee Hooker because he played an older style of the blues that he learned from his father (from deep in the delta) that did not adhere to the standard twelve or sixteen bar format or to standard norms of timing.

I now decided to dig deeper into Atlantic’s catalog. Ray Charles is considered to be the one responsible for originating Soul music by fusing Gospel with Rhythm and Blues. His first hit on Atlantic records was I Got a Woman (Co-written with Renald Richard, his trumpet player in 1954). Imagine my surprise when I searched on this song title and found the following (from Wikipedia):” The song builds on “It Must Be Jesus” by the Southern Tones, which Ray Charles was listening to on the radio while on the road with his band in the summer of 1954. He and a member of his band, trumpeter Renald Richard, penned a song that was built along a gospel-frenetic pace with secular lyrics and a jazz-inspired rhythm and blues (R&B) background. The song would be one of the prototypes for what later became termed as “soul music”….” Again, to hear the song, click on the link. I don’t know about you, but, it seems to me that a pattern is emerging here. It almost seems that someone thought that “It Must Be Jesus” could be a hit song, if only we got rid of Jesus. And so they did. Hmm… were these same people around when Don Covay secularized Pains of Life and likewise cut Jesus out of the picture? I wonder.

Fast forward one year later from the release of Chain of Fools to 1969 when Led Zeppelin made their debut on Atlantic records. Their first LP contained numerous “borrowings” from other artists, namely; Babe I’m Gonna Leave You by Anne Bredon, originally attributed to Page/Plant, You Shook Me (this was actually Earl Hooker’s tune Blue Guitar with lyrics possibly by Muddy Waters, although the song was later credited to Willie Dixon and J.B. Lenoir) also originally listed as Page/Plant, Dazed and Confused, written by Jake Holmes (who opened for Page’s Yardbirds) but slightly changed and attributed to Page, Black Mountainside which was actually the Irish ballad Black Waterside as arranged by Bert Jansch combined with Davey Graham’s She Moved Thru’ the Bazaar/Blue Raga, attributed to Page, Communication Breakdown, a thinly disguised cover of Eddie Cochran’s Nervous Breakdown (Bonham/Jones/Page) and How Many More Times, which was really Howlin’ Wolf’s You Gonna Wreck My Life (Specifically the T-Bones’ version and by the way, the T-Bones’ producer was Giorgio Gomelsky – the same person who produced Page’s Yardbirds). How Many More Times also contains quotes from other songs, such as, The Hunter (recorded by Albert King) and Beck’s Bolero which Jimmy Page recorded with Jeff Beck.

This pattern of borrowing songs from other writers and making “versions” of them continues for most of Zeppelin’s career. I wonder? Could it be mere coincidence that Ray Charles, Aretha Franklin and Led Zeppelin all seemed to be involved in this practice and they were all associated with Atlantic records? Perhaps it is so. Regardless, I still admire and enjoy these artists.

3 thoughts on “Chain of Fools”