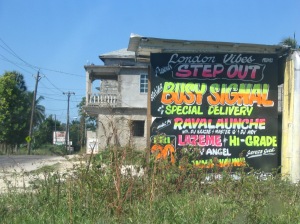 The first time I heard Dub was in 1983 in Jamaica on a minibus from Kingston to Montego Bay. My Jamaican  wife was getting tired of the loud bass and drums and was going to complain to the driver. I suggested that she not do that as what seemed like a tsunami was raging outside and I didn’t want to be unceremoniously put off the bus somewhere in the bush.

As it was, I was sitting in between a very fat sweaty man and the door and each time the bus stopped I had to get off and get drenched in order to let more passengers board.

It was some time after I had returned to the states that I started to recognize in the club and hip-hop music I was hearing on NYC radio stations like WBLS-FM, that the drum and bass were now being emphasized. Also, studio effects (like delay) were now being used that reminded me of the dub music. And, extended “versions” of songs and remixes were being played, much like the dub versions. Hmm? I remembered reading  something in the music press in the 1970’s about Dub poets. I decided to investigate.

Record producers, during mastering, remove much of the vocals from a recording to test the levels. In Jamaica, one such producer, King Tubby (Osbourne Ruddock) liked the results so much that he decided to take them to one of the outdoor dances (or record hops) mentioned in an earlier post. This went over so well with the public that it became a sub-genre of reggae in the 1970’s. The dub poets were DJ’s who would improvise rhymes over the instrumental portions of the tracks (sound familiar?). These were often hard-edged commentaries on political or social themes. Lee “Scratch” Perry was another legendary Dub producer who worked with Bob Marley and the Wailers. Ironically, when Marley’s singles appeared on the US market in extended remixes it might have appeared to some that he was imitating the “new” US trends of urban hip-hop. Actually, this was a Jamaican trend dating from the 1960’s.

This art form made its way to the US by means of DJ Kool Herc, a Jamaican émigré who tried to continue his tradition of the outdoor record hop in the South Bronx but was met with indifference to reggae music by his new homeboys. He quickly adapted by playing the funk  that, although not popular on commercial radio (Disco was all the rage at the time), was the music of choice of his new friends in the projects. Other innovations soon followed such as,  “scratching”. The rest is, as they say, history.

At the top of the post is my homage to Dub music. Click on DubX to hear it.