I recently bought a Gibson 2019 Les Paul Studio Tribute from Sweetwater and I am very pleased with my purchase. I was also favorably impressed with Sweetwater’s customer service. However, I am also puzzled about all of the negativity surrounding Gibson guitars these days.

Yes, I understand that CEO Henry Juszkiewicz overstayed his welcome and made unpopular choices when he tried to innovate and create new designs and update popular models. However, many forget that he and David H. Berryman rescued Gibson (in 1986) from the disastrous sale to Panama-based conglomerate Ecuadorian Company Limited (ECL) which changed its name in the same year, 1969, to Norlin Corporation.

Norlin was typical of what we now know as a private equity firm. They were, as Frank Zappa famously said, “Only In It For The Money”. The Norlin era guitars were marked by generally poor quality but that situation was remedied in 1986 and confidence in Gibson was quickly restored. I have a 1997 Gibson BB King Lucille that I bought that year and I can attest to the high-quality standards of the build.

However, after restoring quality and confidence in the brand Juszkiewicz engaged in forward-looking projects like the Robo-tuners that famously malfunctioned. Although, in fairness, I could not expect Gibson to work on the auto-tuners in silence until they worked perfectly. After all, they are not some government-funded enterprise, they have to make a buck. This is similar to how software vendors roll out products long before they work perfectly.

Another criticism of Gibson is that they are only catering to the well-heeled buyers.  I do sympathize with players who are tired of the overpriced vanity guitars, you know, those custom shop artist models which the average person will never be able to afford. Yet, these are not unique to Gibson. Fender has just released at the NAMM (National Association of Music Merchants) show a Jimmy Page Telecaster for $25,000.00. This is not a vintage 1959 Telecaster nor is it a guitar that Page owned, it is simply a re-creation of his guitar.

Nevertheless, I am appalled at the venom directed at this venerable brand by people who either refuse to spend enough money to get a decent guitar or are willing to spend way too much for a Gibson by another name (PRS, etc.).

The Gibson 2019 Les Paul Studio Tribute is an affordable guitar priced at around $1,199.00. It features 490T (for treble) and 490R (for rhythm) Humbucker pickups, a mahogany body and neck, a maple top, rosewood fretboard, and, quality vintage Kluson style tuners, stop tail bridge, etc. It is essentially the same as the Les Paul Standard (the top of the line of regular Les Pauls – excluding Custom Shop or Signature models), except for cosmetics, or as we say bling.

The Tribute model does not have binding  (a white outline on the body and neck, which has no effect on tone or sound) instead it shows the edge of the maple top, an effect that looks more natural and aesthetically pleasing to me than white plastic binding. It also has a dot neck inlay versus a trapezoidal inlay. Believe it or not, these small differences have caused much angst among the (musical) chattering classes on the internet.

Les Paul Studios since their inception in the 1980s have lacked binding. This is why they are called “Studio” models. They are centered around performance and not appearance. And, tell me why no one has a problem when Gibson uses dot neck inlays on high-end models, such as ES-335’s which cost a lot more than Les Pauls, but they object to their use on this guitar?

The guitar features “ultra-modern weight relief”, another controversial innovation. What the heck does that mean? Well, I remember playing a Les Paul back in the day. It felt like you were trying to hang onto a boat anchor. You could get a hernia from trying to do a string bend. I mean, it was freakin’ heavy.  Gibson first tried to address the elephant in the room by introducing “chambering”, a process that took huge chunks out of the tonewoods of the guitar (spoiler alert – it was not good for tone). They then advanced to “Traditional Weight Relief”, yeah, “traditional”, like this was something Lester Flatt practiced. Nine holes drilled in the body – better than removing large chunks. To make a long story short, ultra-modern weight relief uses small elliptical chambers that make the body lighter without sacrificing tone.

Lastly, many have objected to Gibson supplying the “poker chip” as an option. The poker chip is the plastic surround of the switch that selects the pickups – Rhythm, Treble, or both as seen below. 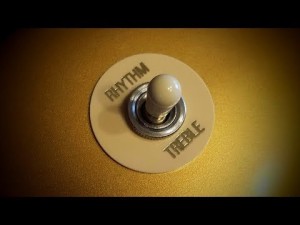 Note that when some guitarists initially decided to remove the poker chip it was considered to be cool but when Gibson gave us the option of installing it or leaving it off they were accused of being cheap. This item is so insignificant that when I asked my guitar tech to attach it he didn’t know what I meant by poker chip and charged me all of eight dollars to do so.

Similarly, many players like Jimmy Page have removed the covers of their Humbucker pickups yet when Gibson features uncovered pickups on this model they are criticized for it. I just don’t get it.

I love the playability of this instrument. I also appreciate how easy it is to carry around. Most of all I love the tone. This guitar has a true Les Paul tone.  The pickups are close approximations of the patent applied for (PAF) humbuckers that Seth Lover designed in 1955.

Here is an example of me playing my Gibson Les Paul Studio Tribute: