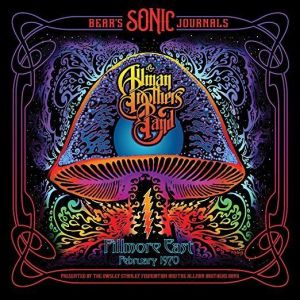 I must already possess most of these songs in almost every possible combination and permutation known, and yet, listening to this reissue it seems like I am hearing them for the first time. And it quickly confirms for me what I knew when I first heard them – that, in addition to having a rock solid rhythm section and a very soulful lead singer, this band had the two most gifted blues-rock guitarists of the time, if not of all time. In addition, there original compositions were indeed original. The album was recorded at the legendary Fillmore East in Greenwich Village between February 11 – 14th 1970 by Stanley Owlsley, the inventive Grateful Dead soundman and probable subject of Steely Dan song ‘Kid Charlemagne’.

The album begins with ‘In Memory of Elizabeth Reed’, (here simply called Elizabeth Reed) Dicky Betts’ tour de force. I really think that this song belongs in the canon of jazz standards. This is classic modal jazz with a blues sensibility. The two guitars blend together perfectly, never fighting with each other, yet, both making strong independent statements. This is followed by the groups unique, high-energy take on Muddy Waters ‘Hootchie Cootchie Man’. Although Berry Oakley sounds a bit like Johnny Winter, he is a strong vocalist who probably should have been given more songs to sing on.

Next up are Blind Willie McTell’s ‘Statesboro Blues’ and another Muddy Waters tune, ‘Trouble No More’. As many of you will know, both are not merely covered but are made wholly their own. And they are played differently from the versions we know and love on either ‘Live at Fillmore East or the first studio album. This is what distinguishes a truly great jam band. The fifth track on the album is a Ray Charles classic, ‘Outskirts of Town. This is not a song often covered on other Allman Brothers albums and it is over eight minutes of pure Blues heaven.

The capstone of this course in creative improvisation is a condensed (eight minutes, eleven seconds) Whipping Post, another original, followed by a full half hour of Mountain Jam. This is based on Donovan’s ‘First There is a Mountain’ and I like this version even better than the one on ‘Eat a Peach’. Both drummers, Jaimoe and Butch Trucks shine on this track, as well as bassist Berry Oakley.

If you value originality and improvisation within the context of blues and rock you owe it to yourself to listen to this. And, if you think you have heard this all before, you haven’t. It amazes me that this concert was performed before they had even recorded their second album. Few rock bands of the time would have even had this much material at this point in their careers yet alone played it with the combination of confidence, taste, and conviction that these young musicians did.