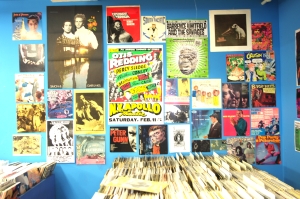 So, who remembers that time between the peak of the Rock and Roll era of the late 1950’s and when the Beatles broke in the US in 1964? I was a child in the New York City suburbs listening to AM top forty radio – too young to remember the heyday of Chuck Berry, Little Richard, Bo Diddley, and Fats Domino. Yet, I heard their hits from only a few years before being played as “Golden Oldies”. This was a time before radio routinely played songs from multiple decades, in fact, it focused on only the most recently released material and even music that would later be critically acclaimed would disappear without a trace within weeks.

This era has been almost completely forgotten by pop culture and history. Perhaps, because it was dominated by cheesy, corporate teen idols like Fabian, Frankie Avalon and syrupy singers like Connie Francis, but, that is just on the surface. Underneath, there was a current of burgeoning soul, blues, rockabilly, doo wop, rock and roll and even jazz all fermenting together which would later produce a potent brew.

The few artists I can think of who paid homage to this period were John Lennon, George Harrison, and Bruce Springsteen. Lennon started with Instant Karma, produced with great slap-back echo by Phil Spector. Springsteen’s most obvious references were on Born to Run. Here he manages to recall the drama and opera of songs from the Leiber and Stoller to the many girl groups of the era, all with a touch of Spector’s wall of sound. Harrison’s All Things Must Pass was notable for having Spector himself recreate that wall of sound technique, beautifully. I could also include Van Morrison, as songs such as Domino and Wild Night really recall the R & B of this era.

So, what was happening then?

Looking at Billboard magazine of Dec. 31, 1960 I see that Etta James’ single, At Last, backed with I Just Want To Make Love To You is one of three Pop singles with strongest sales potential of all records reviewed this week. Elvis was still number one on the chart (despite being in the Army) with Are You Lonesome Tonight, a hangover from the 1950’s. But, soul music is on the rise, Jerry Butler is at number 13 with He Will Break Your Heart. Number 14 heralds the coming importance of the girl groups; it is the Shirelles singing Carole King’s (Will You Love Me) Tomorrow.

Earlier in the year, Marty Robbins’ El Paso (later covered by the Grateful Dead) was number 2, showing the growing impact of Country and Western on the marketplace. The first Motown single, You Got What It Takes by Marv Johnson was number 16 on the “Honor Roll Of Hits”. By March, Jimmy Jones’ Handy Man, later covered by James Taylor was number 4. The Everly Brothers were still around with Let It Be Me (actually it was a big year for them with Cathy’s Clown and When Will I Be Loved, later covered by Linda Ronstadt) . Curiously, Neil Sedaka had a song at number 99 titled Stairway To Heaven, hmm.. I smell a lawsuit.

Sam Cooke had a major hit with Chain Gang, Ray Charles released the classic Georgia On My Mind and other soul chart toppers were Shop Around – The Miracles, Save The Last Dance For Me – The Drifters, and Stay – Maurice Williams.  Surf music may have been introduced this year by Walk Don’t Run by the Ventures and bubbling under were both Aretha Franklin, with Today I Sing The Blues and Freddie King with Have You Ever Loved A Woman. Finally, Earl King released Come On (parts 1 and 2) which was notably covered by Hendrix and Stevie Ray Vaughn.

Springsteen influence Gary U.S. Bonds charted in July with his party anthem Quarter to Three. Ray Charles also had a hit (no pun intended) with Hit The Road Jack. New Orleans was represented by Ernie K Doe (Mother in Law) and Lee Dorsey (Ya-Ya). A personal favorite from this year was Del Shannon’s Runaway. In addition to Shannon’s singing (which sounds a bit like Bob Weir of the Grateful Dead) you have that wild, calliope-like sounding keyboard that prefigured Al Kooper with Dylan circa 1966 or Garth Hudson with The Band. The descending riff also seems to foreshadow King Crimson’s In The Court of the Crimson King or In the Wake of Poseidon.

OK so in March of 1962 the album covers of the week, according to Billboard, were from records by Edith Piaf and Aaron Copeland – you can see how rock still had a long way to go in order to have mainstream acceptance. However, soul music is really starting to take off. Sam Cooke is number 3 on the R&B chart with Twisting The Night Away (covered by Rod Stewart), Solomon Burke is at number 6 with Cry to Me, King Curtis follows with Soul Twist, then Etta James-Something’s Got A Hold On Me, Buddy Guy is number 12 with Stone Crazy, Bobby Bland at number twenty with Ain’t That Loving You – wow, how could anyone overlook such a time of great music? And this is just one semi-monthly edition of Billboard.

By June, a single by “Little” Stevie Wonder is listed as being of “moderate sales potential”. Albert King appears with a single, What Can I Do to Change Your Mind. Ray Charles had made a switch to Country and I Can’t Stop Loving You was the number 1 jukebox  song in Memphis and the mid-south.

In October, Herbie Hancock’s first album was reviewed as a “Special Merit Album”. Green Onions by Booker T and the MG’s was number 2 on the R&B chart. Bobby Bland’s Stormy Monday (later, Allman Bros.) was number 6, and Twist and Shout by the Isley Brothers ( later, the Beatles) was  barely charting at 27. B.B King has a song with “Strong Sales Potential” while the Supremes, Syl Johnson (Is It Because I’m Black)  and jazz guitarist Jim Hall have songs with “Moderate Sales Potential”.

By ’63 we have the Beach Boys with their brand of car and surf music, later to yield great vocal harmonies and Brian Wilson’s inventive songwriting which influenced the Beatles greatest works. we also have the emergence of commercial folk music with Peter, Paul and Mary and Jazz has really crossed over as Herbie Hancock’s Watermelon is number 15 on Billboard’s Honor Roll of Hits.

The Chiffons’ He’s So Fine was number 1 on the hot 100. This is the song that subliminally caused George Harrison to write My Sweet Lord. There is, perhaps, no greater testament than this as to how much this interstitial period of rock and roll influenced what was to come in rock music. The music of this time had become embedded in the younger generation that was trying to form their identity at this juncture. They may have started with Elvis but they were suddenly listening to Gene Pitney (a big influence on Neil Young).

I hope that in this rather long-winded post I have given you some idea why this period in music is so important and ripe for exploration. During these years, most of the blues and rock and roll greats were still active and touring. If you want evidence of this look up “American Folk Blues Festivals” on YouTube and you’ll find Muddy Waters, Sonny Boy Williamson, Junior Wells, Buddy Guy, Otis Rush, Howlin’ Wolf, Big Momma Thornton, Sister Rosetta Tharpe, Lightnin’ Hopkins, John Lee Hooker and others touring Britain and Europe at this time, teaching the likes of the Rolling Stones, the Animals, Eric Clapton, Jimmy Page and many others what authentic blues sounded like.

One thought on “Between Rock and Roll and the Beatles”