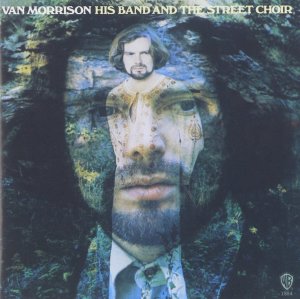 I must admit that Moondance came to me very naturally. I just got it. I was weaned on the kind of R & B and Soul that Van was emulating. I still recall being in shock as I heard through my transistor radio that Sam Cooke had been mortally wounded. So, I could easily recognize the reference on His Band and the Street Choir, in the song Domino, to Cooke’s Were Having A Party.

Whether Morrison is melding folk with jazz as he did on Astral Weeks or mining R & B, he always puts his distinctive mark on the music and carries the listener into another realm. He certainly succeeds in doing that on this album.

Domino was a number 9 Billboard hit, one notch ahead of Brown Eyed Girl, yet, since Van eschewed fame, that was not the intent of this recording.  Instead, he was taking us with him to where he was at: living in Woodstock, NY at a heady time for rock music, his neighbors included Dylan, the Band and Jimi Hendrix. He was in a good place , happily married, working with a sympathetic band and able to go back in time and reminisce while remaining grounded in the present.

For music from 1971 it remains timeless. Think about it, number three on the charts at the time was Knock Three Times by Tony Orlando and Dawn! Number 6 was I Think I Love You by the Partridge Family and number 15 was It’s Impossible by Perry Como.

This album brings Morrison’s influences and references from Bobby Bland, John Lee Hooker and Sam Cooke up through Curtis Mayfield and James Brown. The band is incredibly tight and complimentary. Check out the alternate track of I’ve Been Working, it is worth the price of the reissue by itself.

Van’s singing is exquisite, his references to gypsies are authentic, as he grew up being exposed to Irish Travelers and their caravans, and his emotions are real. He shows that he can transition between the stream of consciousness writing of Astral Weeks  and more conventional songwriting (as he also did on Moondance). And he produced the album himself. It had a clear, fresh sound in 1970 when it was released – I remember Domino just leaping off of the track – and it sounds just as crisp on the reissue. It will make you want to dance.

There are five alternate tracks included: Call Me Up in Dreamland (take 10), Give Me a Kiss (take 3), Gypsy Queen (take 3), I’ve Been Working (alternate version), and I’ll Be Your Lover Too (alternate version). All in all a worthy addition to your music collection. But, you knew that.