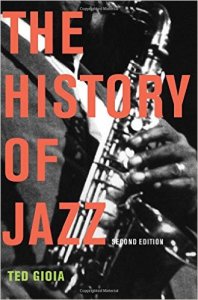 I am now reading History of Jazz by Ted Gioia, an excellent read that is filling in my knowledge of the music, especially its origins in New Orleans and Chicago. It has led me to Library of Congress recordings of Alan Lomax’s 1941 interviews of Jelly Roll Morton (on YouTube). These are incredible documents. Morton is absolutely spellbinding in his storytelling, very erudite. Rock music fans might be familiar with Jelly Roll through his tunes that Hot Tuna recorded like “Hesitation Blues” and “Don’t You Leave Me Here”.

He recounts his own experiences composing songs, getting ripped off for not copy writing tunes, and making $100.00 a night on a bad night in 1905 with fine champagne flowing like water. He also provides biographies of other early jazz musicians. He describes the brothels, Honky Tonks, gambling and drug abuse of the times. All of this is punctuated by Morton’s fine piano playing. It is hard to believe that Jelly Roll Morton, then only in his late 40’s, was then an elder statesman of Jazz and one of the few links back to the days of early jazz. Even though jazz stretches back to the 19th century it was only recorded first in the 1920’s.

I also found on YouTube recordings of early New Orleans jazz artists King Oliver and Louis Armstrong. These recordings convinced me of the importance of Armstrong to Jazz for I could clearly discern the break he had made from the New Orleans tradition of the horns simply ornamenting the melody, while being an integral part of the ensemble, to becoming a featured soloist and improviser.

However, an exceptional clip is the following video from critic Ralph Gleason’s Jazz Casual show in 1963 in which Earl ‘Fatha’ Hines gives a first person historical account, along with demonstrations of the music from early jazz to modern jazz.

I lament that icons like Hines were still playing when I was old enough to hear them and yet I didn’t go to see them. I guess that I was too enamored with what was new and in vogue at the time. That is not to say that I regret my choice in music back then, because, I saw many, then current, acts that have proved over the years to be classic. But, I do regret that I had a bias against performers who I judged to be old fashioned or past their prime (many were in fact still performing at a high level).

I came to my appreciation for jazz and pre-war blues late in life. I appreciated early jazz even later in life. I am grateful that I have lived long enough to understand the worth of this music and hope that others can avoid the fallacy of believing that the music or art of their peers is more important than that of their ‘Fatha’s’.