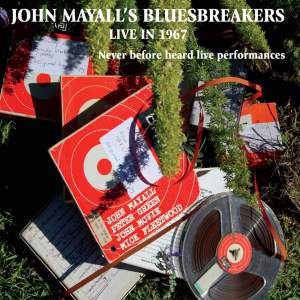 I am listening to the just released John Mayall’s Bluesbreakers – Live in 1967 and I am grateful that a dedicated Dutch fan taped these performances way back then and that modern audio restoration techniques have made it possible for me to enjoy them today. Mayall had many great musicians pass through his band but for my money this is an especially fine line up – and to think, they were only together for three months!

Peter Green shines on this album. His deft legato phrasing, incredible sustain and killer blues tone are the highlights of every tune. However, I must say that John Mayall also plays and sings very well throughout, leading me to the conclusion that he is indeed deserving of more regard than he is usually given by critics who only recognize his talent for hiring great lead guitarists. The rhythm section of Fleetwood and MacVie is also better than they were given credit for back in the day.

What is the sonic quality of this album? Well, you can hear each instrument distinctly. The vocals sound like they were driving the needles into the red, with some clipping. However, Peter Green’s guitar sounds glorious throughout.

Otis Rush is well represented on this album with three tunes; Double Trouble, I Can’t Quit You, and So Many Roads. Freddie King actually has four: Have You Ever Loved A Woman, The Stumble, San Ho Zay and Someday After Awhile. These two artists actually accounted for much of the British Blues boom of the 1960’s. There is also a fantastic eight minute plus version of Stormy Monday on which Peter Green smokes.

This album would not be the starting point for neophytes to Mayall or British Blues but it is a must for fans of John Mayall, Peter Green, or early (1968-1970) Fleetwood Mac.